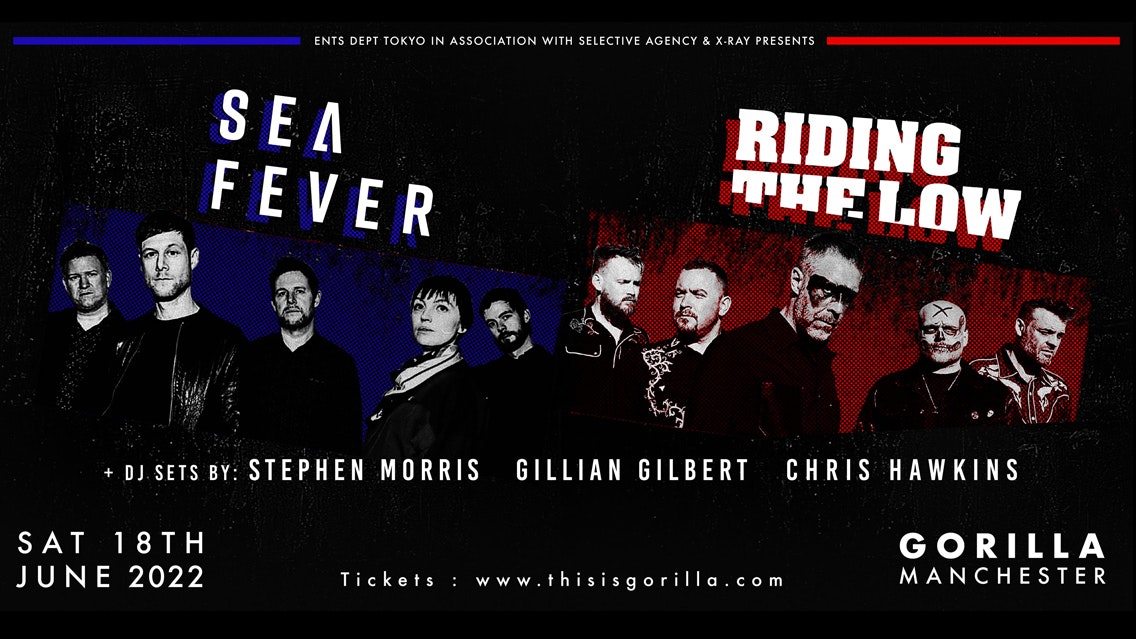 Gorilla presents a powerhouse of highly influential artists performing together at a specially curated show featuring live music by co-headliners Riding The Low and Sea Fever with support by Deathretro, plus DJ sets by New Order’s Gillian Gilbert and Steven Morris, and Chris Hawkins.

The level of bonafide legends taking to the stage is off the scale and we hope you can join us for what will be a truly memorable evening of great live music and dancing.

Riding The Low were formed in 2006 by Paddy Considine, after he had a revelation watching indie rockers Guided By Voices.

Their debut album ‘What Happened To The Get To Know Ya?’ Was recorded in a day under a railway arch in their hometown of Burton On Trent. The band then recruited Chris Slusarenko, formerly of Guided By Voices and now Eyelids OR, to produce the album.

Fast forward to 2022 and the band have released ‘Gobshite Rambo’,  their most complete work to date. With potential singles ‘Black Mass’, ‘Spinning Like Us All’ and front runner ‘Carapace of Glass’ the band sonically and lyrically explore themes of triumph and loss and expand their repertoire by introducing beautiful arrangements and punchy brass. The album is galvanised by huge anthems ‘Wake Me Up When It’s Over’, ‘A Crisis Common Stuck’ and ‘Tommy Hawk’, the latter pays homage to Adam and the Ants with its Native American chanting on the chorus.

Sea Fever explains that their coming together as a unit felt inevitable: “We’d wanted to work with each other for ages, so when we finally sat down in the studio, the band just seemed to come together naturally. It felt like we were really free to explore the kinds of music that have always inspired us, we dug right through the record crates of our minds to shape the sound of Sea Fever.”

The result is a debut ten-track album that represents the sound of a band instinctively working together; effortlessly exciting and equally timeless. Including recent singles ‘De Facto’. ‘Crossed Wires’ and ‘Folding Lines’, the full-length will also feature upcoming singles ‘Under Duress’ and ‘Built To Last’.